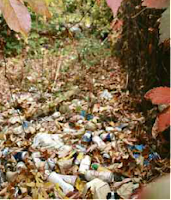 A drug den on Clapham Road that had become a magnet for addicts and fly-tippers has been cleaned up. The garden of an abandoned house in Stockwell was littered with used needles after gangs of addicts turned it into a shooting-up gallery. Broken beer bottles, dumped rubbish and rotten food was also left at the Clapham Road home leaving neighbours desperate for it to be cleared out.

A team of eight local offenders joined specialist cleaners from Lambeth Council to make sure the potentially deadly waste was safely disposed of. Dozens of needles and syringes were collected at the property, which was know locally as the “Doctor’s surgery”. The private house was overrun with the addicts after it was abandoned and left to go to ruin.

Matt, an offender who helped in the clean-up through London Probation’s Community Payback scheme, said: “It’s jobs like this that make us want to do the work. I’ve got kids and the possibility of a child wandering into a place like this doesn’t bear thinking about.” Lambeth’s street care team, public health and community safety teams were joined by the Stockwell Safer Neighbourhood team and offenders from the Community Payback scheme to get the job done. To make sure the house doesn’t become a haven for drug users again there will be regular checks on it and work will be done to make it as secure as possible.

Sergeant Geoff Ross from Stockwell Safer Neighbourhoods Team, said: “Clearing up this eyesore, which was being used by drug users and becoming a health hazard, will definitely improve the appearance of the area and reduce anti social behaviour. I'd like to thank the council for working with us on this and for overcoming the barriers involved in dealing with a private property of this sort.”

What do you think of how the site looks now? Let us know in the comments, or contact your Labour councillors. (story from: Lambeth Life)
Posted by Alex Bigham at 16:46

Cleared up? More like anotehr rubbish blogspot. The place is still like an abosolute tip. This is kidology - a smokescreen to cover other neglected matters - such as public toilet provision in central stockwell - which is all set to continue. By Stand up for Stockwell you mean grot stand up commedy.

If the disease is not treated immediately, then everything will result in harm to the health of the body. Thank you for sharing the information


This information is very useful. thank you for sharing. and I will also share information about health through the website

Thanks for sharing the information