Ngosi Edwards has been sentenced to 19 years in jail after he was found guilty of murdering Robel Tewelde on the Studley Estate in Stockwell in 2007.
story below from http://www.yourlocalguardian.co.uk/news/local/wandsworthnews/4271217.Teen_to_spend_19_years_in_jail_for_murder/
Ngosi Edwards, of Hemans Street, was sentenced at Southwark Crown Court on Friday, the second teenager to be convicted of killing Robel Tewelde. 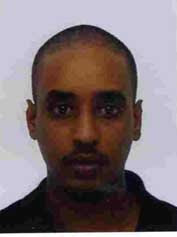 Edwards was with Jermaine Callum - who was found guilty of murder on July 10 last year and sentenced to 19 years - in a communal stairwell of the Studley Estate in Stockwell on Tuesday October 2, 2007.
Just before midnight Mr Tewelde was with his brother and friends when Callum, from Clapham, arrived and produced a Mac-10 machine gun.
Mr Tewelde and the group run away up a communal staircase but Callum fired at least three shots at them as they reached the second floor.
Mr Tewelde was hit by two 9mm bullets.
One struck him in the back of his right leg, the other - the fatal shot - entered his lower back, travelling up and across his body and striking his liver, both lungs and his heart.
Mr Tewelde collapsed on the landing of the next floor. Police officers and ambulance tried to save him, but he died of at the scene.
Edwards and Callum cycled away on their bikes.
Detective Chief Inspector Adnan Qureshi said: “Edwards was an accomplice in this crime and has been convicted accordingly. "Neither he nor Callum has given an explanation as to why the shots were fired. "I do not believe Robel was an intended target.
“Robel was a decent young man from a decent family. "He had started a university course that very day and should have been looking forward to a bright future.
“Instead he had his life taken in a pointless and apparently random act of violence.”
Posted by Alex Bigham at 18:46

19 years. no Judges recommendation on how long to be served before early release that should knock it down to around 7 years so free before 30 years of age.
What ever happened to a life sentance being life (i.e 30years like what the Great Train roobes got?).
No wonder young people belive murdering someone has not conceqence.