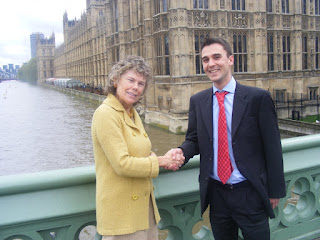 Despite the national difficulties for Labour, Mark Harrison and the Labour team in Lambeth have won a hard fought victory in a council by-election. Labour won by over 300 votes in the Princes Ward (covering Kennington and Vauxhall), a substantial margin in a local by-election.

Mark campaigned hard to expose the failings of the Lib Dems on crime and over the old Lilian Baylis site, and will be a hard working councillor, who has already campaigned to secure a rent cut for local residents.

"This is a stunning victory for Labour in Lambeth despite the most difficult national circumstances for decades. The result is a tribute to our hard-working and popular candidate, Mark Harrison, who has earned the backing of local residents, as well as recognition of how Lambeth is improving with Labour."

"I’d like to thank everyone who voted for me, and I congratulate my opponents on a good, clean fight. I will do my best to work hard for every resident in Princes Ward. It’s deeply humbling to have received so much support, and I’m very excited about this opportunity to improve life for local people."