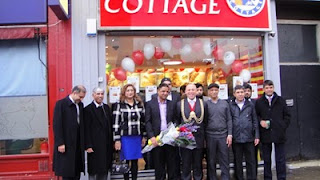 It certainly wasn't a poultry turn out with managers, staff and customers posing for a photo outside the new take away, which has created five new jobs (hopefully the pay is not chicken feed).

While the Mayor opted for a veggie burger, locals tucked into some finger-lickin food.

The Mayor said, "I was welcomed by Syed from the Sun Star Group, which runs several businesses in Lambeth including the Costcutter around the corner, and he was clearly delighted by the new store."
Posted by Alex Bigham at 14:26

may be useful for all, helpful article once and pardon me permission to share also here :