Your Stockwell Labour Councillors are spitting with rage at the prospect that the Northern Line could be affected by closures for 65 weekends.
Tube Lines wants early closures between Stockwell and Morden from July until November 2011. 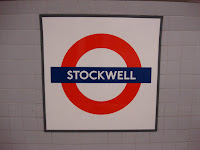 A spokesperson from Tube Lines has said: "We requested a mixture of extended engineering hours (EEH) from 11.30pm until start of traffic and 52-hour part line weekend closures.
There is confusion as to whether the lines will close at 11.30pm, or at the even earlier time at 8.30pm, but either way it looks likely that there will be a much reduced service in the evenings and weekends.
Alex Bigham , Labour Action Team Member for Stockwell said “This is another blow to commuters who have suffered long enough on London’s misery line. The northern line is already overcrowded and subject to delays. It is time that the Conservative Mayor took some leadership and improved the service for Londoners.”
Labour Councillors in Lambeth are campaigning for a new bus service to run from Clapham to Bank - to take pressure off the Northern Line. You can read more and join the many who've already signed the petition here.
Posted by Alex Bigham at 13:18