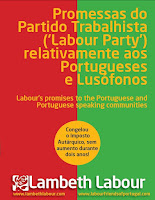 At a packed event on Friday night, members of the Portuguese speaking community joined with Labour councillors at the Stockwell Community Resource Centre to launch the UK's first ever manifesto in Portuguese. The event was hosted by Stockwell's Labour team, and Cllr Steve Reed spoke along with Portuguese activists Alcino Francisco and Adelina Pereira.

The reception also saw the launch of the new Labour Friends of Portugal and the Lusophone Communities, a network which is intended to strengthen links between the Portuguese and Labour Party, as well as encouraging greater political activism by the Portuguese speaking community.

Thanks a lot of admin already give the information and sorry here we permit the article share may be useful and help you :

Loving your content and your blog.
Happy Independence Day Wishes In Hindi 2018