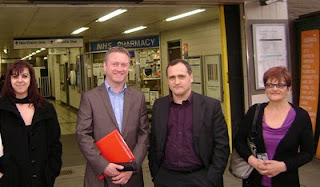 The Leader of Lambeth, Cllr Steve Reed, joined Stockwell candidate Alex Bigham and a number of Portuguese campaigners to go on a walkabout in local cafes and restaurants this evening with visiting Portuguese MP, Paulo Pisco. Paulo Pisco represents the diaspora communities in the Portuguese Parliament, and works very closely with Prime Minister Jose Socrates.
The group were talking to Portuguese speaking residents in a number of venues from the Centro Cultural on Lansdowne Way, to O Cantinho on Stockwell Road to Estrela and Cafe Portugal on South Lambeth Road.

As well as chatting to locals, they distributed copies of Lambeth Labour's Portuguese manifesto, the first ever manifesto in Portuguese to ever be produced by a political party in the UK. The walkabout was a great success, with Steve, Alex and Paulo meeting over 100 people during the visit.
Posted by Alex Bigham at 21:50

may be useful for all, helpful article once and pardon me permission to share also here Cara mengobati demam berdarah

Take every chance you get in life, because some things only happen once
waspada bahaya akibat kelebihan dan kekurangan albumin bagi kesehatan