Weapons and ammunition seized in Brixton and Stockwell

On Tuesday 3 August as a result of vigilant members of the public and open searches conducted by Lambeth Borough Police Officers, three firearms have been found in Brixton and removed from the streets of our borough.

These included one handgun with the relevant ammunition, a shot gun and a very realistic BB gun. All weapons are believed to be involved in or for the use criminal activity or the intimidation of others, although it is not believed they are linked to each other. 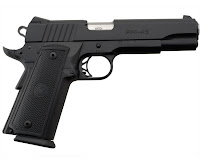 Each weapon was found in separate locations within hours of each other. An investigation by Lambeth’s Pro-active Firearms Team is underway to identify those responsible for these weapons and any offences which may have involved these firearms.

The ongoing work of this unit and others on Lambeth, together with useful intelligence from the public has played a significant part in reducing gun crime on this Borough. The recovery and removal of these three weapons from criminal hands greatly assists work to further reduce the incidence of gun crime in Lambeth.

Local police will continue to use a wide range of tactics against this crime, to ensure the safety of the local community. This follows the seizure of three other firearms found in the past seventeen days: a loaded 9mm handgun from Streatham, a shotgun in Brixton and a quantity of live ammunition from Stockwell.
Posted by Alex Bigham at 22:11

Thank you for sharing the information, may be useful for everything .. Greetings