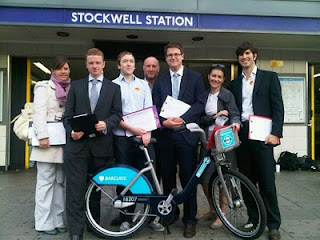 Local Councillors Alex Bigham, Imogen Walker, Peter Robbins and Pete Bowyer were outside the tube station asking local people to sign the petition calling the 'Mayor of London to extend the Barclay's Cycle Hire Scheme to Stockwell at the earliest possible convenience'.

Over 120 people signed the petition in just 1 hour – a rate of 2 every minute. Many were concerned that the bike scheme docking stations are disproportionately located in North, rather than South London.

Local resident Alex Baker said, “As someone who lives in Stockwell and regularly commutes to central London it’s important that the Mayor doesn’t forget people that live South of the river. Bringing the bike hire scheme to Stockwell would ease pressure on the tube station and buses which are already massively overcrowded in rush hour.”

Cllr Alex Bigham said, “We have to ensure that the bike hire scheme isn’t just for Zone 1 and helps people in South London to get around and get fit. The support we had for the petition from local people shows how important an issue this is, and how successful the scheme would be if it came to Stockwell.”

The campaign is continuing to collect signatures and has already been backed by Councillor Steve Reed, the Leader of Lambeth Council who mentioned it on his twitter page (http://twitter.com/cllrstevereed)

The Cycle Hire scheme currently extends to Vauxhall, Kennington and Oval which boarder Stockwell. Extensions to the Cycle Hire Scheme will ease pressure on the very busy Northern & Victoria tube lines that converge at Stockwell.

This really answered my problem, thank you!

I’m impressed, I must say. Really rarely do I encounter a blog that’s both educative and entertaining, and let me tell you, you have hit the nail on the head. Your idea is outstanding; the issue is something that not enough people are speaking intelligently about. I am very happy that I stumbled across this in my search for something relating to this.

I am often to blogging and i really appreciate your content. The article has really peaks my interest. I am going to bookmark your site and keep checking for new information.

Can I just say what a relief to find someone who actually knows what theyre talking about on the internet. You definitely know how to bring an issue to light and make it important. More people need to read this and understand this side of the story. I cant believe youre not more popular because you definitely have the gift.

Oh my goodness! an amazing article dude. Thank you However I am experiencing issue with ur rss. Don’t know why Unable to subscribe to it. Is there anyone getting identical rss problem? Anyone who knows kindly respond. Thnkx

It’s hard to find knowledgeable people on this topic, but you sound like you know what you’re talking about! Thanks

You made some decent points there. I looked on the internet for the issue and found most individuals will go along with with your website.