Claim Cash for your Community: The Ward Purse Scheme

The Ward Purse is an innovative scheme which involves making funds available for small projects that bring real benefits to local communities in each of the Lambeth’s 21 wards.

There is £12,000 capital available for Stockwell to be spent on such things as small building works or the purchase of equipment. These are carried out either by the council itself or by community organisations. Councillors in each ward can choose to pool the money for one big project or use it to pay for up to three smaller schemes.
The deadline for applications this year is Tuesday 30 November 2010. Please contact one of your Stockwell Labour Councillors asap to suggest a deserving cause.

More information about the ward purse: http://www.lambeth.gov.uk/Services/CouncilDemocracy/Consultations/ClaimCashForYourCommunityWardPurse.htm
Posted by Alex Bigham at 18:25 6 comments: Links to this post

Local volunteers get hands dirty as part of Co-op Council

A group of local residents were joined by Labour Councillors this weekend (Saturday 2 October) to help support a youth project in Stockwell and demonstrate some of the ways people can get involved in the co-operative model that Lambeth Council is currently piloting.

The volunteers took part in a new scheme that is being piloted by Stockwell Labour Party, called “Labour’s community action team” to get its members and other residents involved in donating their time to help out with local charities and projects.
The group spent a day helping out at the Oasis Children’s Venture in Stockwell, a charity which runs a number of projects to help young people including an adventure playground, a nature garden and a go-kart track.
The volunteers helped out with painting signs, clearing overgrowing trees and building a ‘living wall’ from compost. The work wasn’t just of benefit to the children that use the playground though - a passageway that runs along the site (between Larkhall Lane and Priory Grove) was cleared of overhanging foliage improving the look and security of the alley which is used by many Stockwell residents.

Councillor Imogen Walker, Labour member for Stockwell said, “It was fantastic to see what a difference just giving a few hours of your time can make to a local charity like Oasis. They provided the tools and advice so that the people who came could play their part in a scheme that relies on the support of many volunteers. This is just the start of our community action team who will be out on a regular basis doing our bit to contribute to improving our local area.

Morgan McSweeney who helped organise the volunteers said, “We would like to thank everyone who took part in the event from the local residents, the councillors and Jess and the other staff at Oasis for making it such a success. If you would like Labour’s community action team to come help with a project you’re involved in, please get in touch.”
To get involved in the community action team, please contact Morgan McSweeeney on morganmcsweeney@gmail.com or call 07739 200 068.
Posted by Alex Bigham at 14:28 5 comments: Links to this post

Now in its 23rd year, Lambeth are holding a series of events to celebrate Black History Month which runs from 1 October to 1 November.

This year the council has been working with local businesses, community groups and residents to put together an exciting array of events and family activities, that will take place in and around Lambeth.

The events are based on three themes: cultural heritage, economic wellbeing and health and social wellbeing. Most events are free. However to avoid disappointment please book in advance for all events.

For details of all the events click here.
Posted by Alex Bigham at 17:49 2 comments: Links to this post

October is 'Celebrating Age' month in Lambeth, which is jointly organised by the Council and Age Concern.

This involves a wide range of events for older people throughout the borough, many of them free. For instance, there are free activities for over-50s at the Brixton Rec, Flaxman Sports Centre and Ferndale Community Sports Centre.

The month kicked off last week with a launch at Age Concern Lambeth’s headquarters at which the Mayor of Lambeth, Cllr Neeraj Patil and the Deputy Cabinet Member for Older People, Cllr Jane Pickard both spoke. On 20 October, the extension to the Woodlawns Centre in Streatham which houses the Streatham Darby and Joan Club will be opened by the Mayor and Streatham MP, Chuka Umunna.The month will end with a tea dance party at the town hall.

All are welcome at the events. Lambeth is leading the way in offering a whole month of events to celebrate older people – most boroughs just observe a national day on 1 October.
For more details download the brochure of events here.
Posted by Alex Bigham at 17:29 5 comments: Links to this post 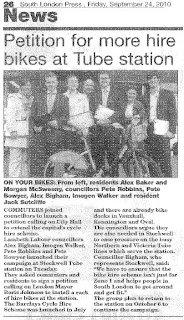 The campaign team will be outside Stockwell tube station signing up people to the petition from 7.30am on Wednesday 6th October along with Labour London Assembly Member Val Shawcross who also sits on the Assembly's Transport Committee.

If you want to help join the team, please feel free to come along on Wednesday morning, or sign the online petition.

The Evening Standard and the South London Press (pictured) have both picked up on the campaign as well as local bloggers, such as Stockwell News.

The team will be presenting the petition to Mayor of London in the autumn.
Posted by Alex Bigham at 15:36 4 comments: Links to this post

Volunteering in our community

This Saturday (2nd October), Stockwell Labour Party and your Labour Councillors will be helping our local charity, the Oasis Project, to clear up their play area. We will be there from 10am until 1pm, and we would really appreciate your help, for however much time you have to spare.

The Oasis Project run the adventure playground, nature garden and go-cart track, offering local children and young people in our neighbourhood a safe place to play, explore, learn and make friends. More about what they do can be found at oasisplay.org.uk

If you are available to help or would like more information, please contact Morgan McSweeney:
morgan.mcsweeney@gmail.com
or
0773920068

We hope to see you on Saturday!