The map that shames the Government

One of the most impressive pieces of propaganda that the Tory-led government has managed to perpetuate is the idea that cutting public services to this degree and this quickly is not ideological, but necessitated by economics. Of course, every party agrees there is a need to reduce the deficit, although I can never remember the Lib Dems or Tories telling the Labour government to reduce the amount we spent on hospitals, schools or police. If your bank gave you a choice of paying off your mortgage over 15 years or 30 years, and the monthly repayments for doing the former meant you couldn't afford your other bills, you wouldn't take the first option?


The idea that there are simply vast sums of money that were wasted by Labour, or continue to be wasted by councils is simply untrue. Eric Pickles, the Thatcherite minister for local government likes to lambast councils for spending money on keeping their residents informed about services, or paying their senior staff, as if saving a few thousand pounds would make up for cutting council's budgets by one third. In Lambeth we have made efficiency savings over the past four years, and will further reduce the number of staff at our budget meeting tonight. But while we will do our utmost to protect frontline services, making staff redundant is not pain free - not only does it damage morale within an organisation, but it can affect our ability to monitor the services we provide local residents. 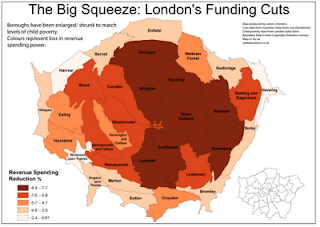 The worst aspect of the cuts is not that they are front loaded, nor that they appear to be driven by ideology rather than good sense. It is that they are targeted at the most deprived communities in our country. The map above has been produced from figures compiled by The Guardian. It shows how our most vulnerable residents are being targeted - those boroughs with higher levels of child poverty, like Lambeth, Hackney and Haringey come off worse, while richer boroughs, often run by Lib Dem or Conservative administrations like Harrow, Kingston upon Thames or Kensington & Chelsea come off best.

It really is a map to shame Eric Pickles.
Posted by Alex Bigham at 10:45

I hope this post of yours will be more appreciated by it really excellent, i enjoyed it, thanks for posting it. It's great, wish you success in the next blog, this is a post that we all should read at least once.
abcya3 hot games, friv for school for kids 2019, cá koi mini, io jogos for kids