Lambeth Council has officially appointed its first ever Portuguese Speaking Communities Champion, Adelina Pereira, at a packed meeting of the full council. 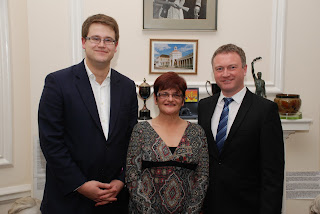 The South London borough contains the highest concentration of Portuguese-speaking people outside of mainland Portugal – over 50,000 residents or one in six of the population, according to estimates, making Portuguese speakers the biggest single minority group in Lambeth.

Adelina Pereira (pictured with Cllr Steve Reed, Leader of Lambeth and Cllr Alex Bigham from Stockwell) is a community activist and writer who has lived in the borough for six years. She has been actively campaigning for the Portuguese-speaking communities, helping to write the first ever Portuguese Labour Party Manifesto for the local elections, and securing the gift from the Azores of the borough’s first ever statue of a Portuguese citizen – Catherine of Braganza.

Adelina said, “It is a great honour to become the first ever Portuguese Speaking Communities Champion. It is right and proper that our community which plays such an active role and adds such vibrancy to our local area is recognised in this way. I look forward to working with the Council and my colleagues in the Portuguese speaking community to drive forward a positive agenda for change. From educational achievement to political involvement, there are a lot of issues we need to address, and I look forward to playing my part.”

Cllr Alex Bigham, who represents Stockwell, which is often dubbed ‘Little Portugal’, said “One of the central priorities of Labour Councillors is to promote equality and to celebrate the diversity of Lambeth’s communities. Portuguese citizens have traditionally been under-represented in our borough’s corridors of power, and with this appointment we hope to go some way to redressing that. Adelina will be a strong and passionate voice for her community.”

The role of Portuguese Speaking Communities Champion was officially announced at a meeting of the council, and has been incorporated into the London Borough of Lambeth’s Constitution. The appointment is for four years, or until the next local elections.
Posted by Alex Bigham at 12:23 9 comments: