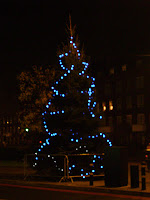 Firstly, apologies for the lack of blogging over the past couple of months. It has been a busy few weeks in Stockwell and the town hall. You can keep up with our latest activities by following us on Twitter - @labourstockwell, @alexbigham, @imogenwalker and @cllrpetebowyer.

Normal blogging service will resume in January, but until then here are a few things that your local Labour team has been up to since September...

- The Portuguese Speakers' Community Centre project have found a permanent home in Kennington at 1 Othello Close (just opposite the tube station). This is great news for the project and will help them deliver services and activities for the Portuguese speaking community. The centre will officially open on 13 December. Email Cllr Alex Bigham if you want to know more.

- The Friends of Stockwell War Memorial has been officially established thanks to the work of Naomi Klein and Sheila Dartnell. They have held a number of meetings and are busy organising work to publicise the much needed restoration of the memorial. The Friends group laid a wreath along with Councillors and the Mayor of Lambeth on Remembrance Sunday.

- We have held a number of consultation meetings with the Stockwell Forum and other residents groups on the plans to develop the Vauxhall - Nine Elms area. You can read Labour's draft manifesto for the area here. There is also now a masterplan being developed to turn the Vauxhall gyratory into a far more pleasant, pedestrian friendly 'town centre' with new residential, retail and office buildings.

- We continue to campaign to bring the TFL bike hire scheme to Stockwell. The Mayor has now promised there will be bike docking stations in Stockwell by 2013, but we will keep up the pressure. A huge number of residents signed the petition which we presented to the Mayor, and you can still add your name here: http://www.gopetition.com/petition/39225.html.

- In other news, the much loved Annie McCall hospital site was put up for sale recently. However, Cllr Imogen Walker continues to work closely with the Stockwell Studios, run by local artists to ensure that any development of the site protects space for the artists to use.

- Finally, we continue to work closely with our hard working London Assembly Member, Val Shawcross. Your Labour team of Ken, Val and the Cllrs in Stockwell have been campainging for a farer deal for residents - a 7% reduction in bus and tube fares, along with reversing Boris Johnson's cuts to police numbers in London. The only way to make sure this happens is to come out and vote Labour in May next year.

Until the new year, have a very happy Christmas, and a peaceful holiday.

Thanks for sharing amazing articles. Such a nice information got from your article. Kindly visit us @ Hiv aids treatment in Mumbai | Top HIV Hospital in India | Hiv Specialist in Bangalore

For Beginners A Complete Guide To Cycling Cyclato

The author of this post is very talented, I greatly admire you, hope you will succeed in the next post. I would love to keep track of your posts, It is really a useful source of information, wish you success.
cá koi mini, abcya for kids, friv Games for kids 2019, jogos io 2019

Nice post!..good information,it is really helpful..it really impressed me alot and i just loved it.Thanks for posting such an informative content: Local Packers And Movers Bangalore

There is noticeably a bundle to know about this. I assume you made certain nice points in features also.

Aw, this was a really nice post. In idea I would like to put in writing like this additionally – taking time and actual effort to make a very good article… but what can I say… I procrastinate alot and by no means seem to get something done.

After study a few of the blog posts on your website now, and I truly like your way of blogging. I bookmarked it to my bookmark website list and will be checking back soon. Pls check out my web site as well and let me know what you think.

There are some interesting points in time in this article but I don’t know if I see all of them center to heart. There is some validity but I will take hold opinion until I look into it further. Good article, thanks and we want more! Added to FeedBurner as well

The next time I read a blog, I hope that it doesnt disappoint me as much as this one. I mean, I know it was my choice to read, but I actually thought you have something interesting to say. All I hear is a bunch of whining about something that you could fix if you werent too busy looking for attention.