Stockwell Councillor Alex Bigham said "It is fantastic news that this money has been provided to ensure that our memorials are fit for heroes. 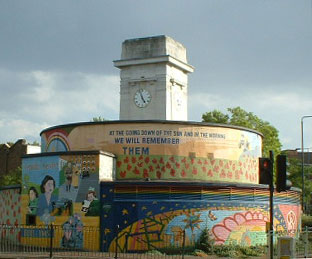 "Many modern heroes such as Naomi Klein and Sheila Dartnell have campaigned for years to ensure these memorials get the recognition and funding they deserve. We look forward to working with them on plans to restore and imporve the memorial and surrounding gardens."

Councillor Paul McGlone, Lambeth council’s Finance cabinet member, said: “Capital funding is very tight, but all Lambeth councillors agreed that the £200,000 funding had to be allocated to honour our responsibility to our war memorials in memory of those who have fallen.

“We also owe a debt of gratitude to local people like Naomi Klein, a Stockwell resident, who wrote a book, ‘These Were Our Sons’ to commemorate the memory of the 574 local men whose names are inscribed on Lambeth official War Memorial at Stockwell, as well as the Friends of Stockwell Memorial [and Gardens] for their important role in raising the profile of the need for investment.”

The other memorials that will benefit from the funding include:
•Holy Trinity Church, Clapham Common
•St Mark’s Church, Oval
•The London Regiment memorial in Kennington Park
•Streatham War Memorial

The Friends of Stockwell War Memorial said: “We are very pleased that Lambeth’s war memorials, including of course the major memorial at Stockwell, are receiving the attention they deserve. We have been working with Lambeth co-operatively over the past year on plans for improvements to Memorial Gardens and hope to see the results shortly.”

The works are due to be completed early next year.
Posted by Alex Bigham at 17:31

Pretty nice information. it has a better understanding. thanks for spending time on it.

OMG , Amazing !! Everything Informative
This Is really Ah Very good post. Taking the time and actual effort to produce a superb article…
Thanks For Sharing
also Visit Our Sites

Pretty nice information. it has a better understanding. thanks for spending time on it.
Happy Easter 2017
happy mothers day 2017
Fathers Day 2017
birthdaywishesquotes.org
http://www.wishesquotes.org

John arnold is an academic writer of the Dissertation-Guidance. Who writes quality academic papers for students to help them in accomplishing their goals. Mountain Man Brewing Company Case Spreadsheet

Nice post. Thank u so much for sharing with us.
Latest Post Graduate Govt. Jobs Recruitment Notification

Eager to read this article Thanks for this Post !!

Very interesting information to read, may be useful for everything

Thanks for sharing amazing articles. Such a nice information got from your article. Kindly visit us @ Hiv aids treatment in Mumbai | Top HIV Hospital in India | Hiv Specialist in Bangalore AIDS cure 100% for siddha in India

It's great, wish you success in the next blog, this is a post that we all should read at least once. I would love to keep track of your posts, it is really a useful source of information, wish you success.
abcya best free online games, io jogos for school, friv 4 school games 2019, cá koi mini

An interesting discussion is worth comment. I think that you should write more on this topic, it might not be a taboo subject but generally people are not enough to speak on such topics. To the next. Cheers