Following a campaign by local residents and relatives on the memorial, supported by Stockwell's Labour councillors, the Stockwell War Memorial has now been restored to its former glory, along with improvements to the gardens. The mural on the underground shelter has also been repainted thanks to the activity of local volunteers, helped by the original artist, Brian Barnes and the London Mural Preservation Society. 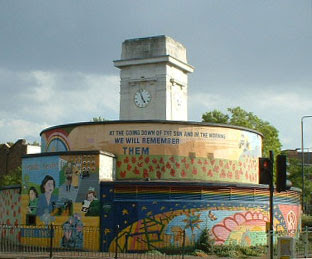 To celebrate this, The Friends of Stockwell War Memorial and Gardens are inviting everyone to the unveiling of a plaque at Stockwell Memorial Gardens on Saturday 14 September at 12 noon. The Mayor of Lambeth, Councillor Mark Bennett, will be doing the honours.

Naomi Klein, chairman of the Friends of Stockwell War Memorial and Gardens, says: “The plaque is a small reminder of the fantastic efforts of everyone involved in this project to create a fitting space to remember the war dead in Stockwell. Some of the families of the men listed on the First World War clock tower will be attending, which shows that the memories of these men are, in some ways, as fresh as ever.”

Cllr Alex Bigham, Labour Councillor for Stockwell, says:
“It is fantastic that we now have a restored memorial that is fit to commemorate those from our community who served in the First World War. Following a long campaign by Sheila, Naomi, and other local residents, Lambeth’s Labour council found the money to renovate the borough’s official war memorial. I’m delighted that this was able to happen in good time for the centenary of the First World War next year.”

The clock tower, which lists 574 Stockwell men who died in the Great War, was unveiled in 1922. In recent years, its condition had deteriorated and some of the carvings had become worn. Sheila Dartnell and Naomi Klein of the Friends of Stockwell War Memorial and Gardens brought the plight of the memorial, a Grade II listed structure, to the attention of Lambeth, who responded last year with a plan to improve the entire Memorial Gardens as well as four other memorials in the borough.

Working with Lambeth Council, the Friends of Stockwell War Memorial and Gardens developed a comprehensive plan to bring the clock tower to a state suitable for next year’s centenary of the start of World War One. It included cleaning the stone and recutting some of the carving, renovating the original wooden doors and replacing the windows. At the same time, new furniture, signage and replacement trees were brought in. The work was completed in August 2013.

In addition, many groups of local volunteers organised by the Friends and the London Mural Preservation Society spent hours carefully scraping off the old paint on the deep level shelter and repainting it. They were ably led by Brian Barnes, the original artist. Thanks to everyone who gave up their time.